Avoiding Institutional Dementia: reinvigorating the study of the History of Education

My year has been neatly book-ended by reminders of the importance of history, to the profession, but also to public life.

Early this year, the Australian Educational Leader, Vol 33, No 1 2011 carried an article by Dr Paul Brock, entitled Learning from the paths we have trodden to get to where we are now. The article was based on Dr Brock’s lead paper at the Australian College of Educational Leaders 2010 conference. In the published version he traces some of the Australian policy discussions since 1991 in relation to teaching languages other than English in order to demonstrate that current discussions about priority languages within the Australian Curriculum continue, rather than begin, the debate. The languages being prioritised are largely (with a noticeable exception for Indigenous languages) the same as agreed in 1991. As Brock points out, however, significant ongoing “wicked” problems for Australian education – in this case, the difficulties of maintaining a supply of trained teachers and ensuring continuity from primary to secondary schooling – remain unsolved. They are likely, therefore, to render current decisions ineffective.

Language learning is only an example.  The difficulty remains that, in a system where education decision-makers are elected on three or four year terms, expend much energy ensuring they have sufficient short-term activity in their portfolio to get re-elected and where heads of education departments serving them are

now largely appointed, rather than promoted through the public service, it is hard to see how continuity, and substantial incremental policy progress, can be achieved.

If, as Brock points out, reform is best conceptualised as a spiral, it is hard to see how we avoid continually falling backwards.

Unlike Dr Croke, whose schooling was under Wyndham’s reformed curriculum, I am a child of the last years of the pre-Wyndham era. 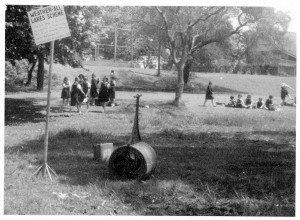 My final day at school (“muck-up day”) was organised around a flood  in the school grounds from exceptional rain, and a pun on the name of the NSW Minister of Education – Ernest Wetherell – who had introduced the Wyndham Scheme . 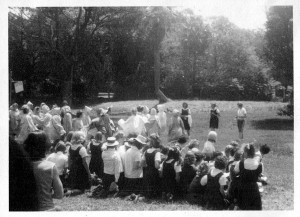 We did at least recognise that change on the scale of an Act of God, was underway!

Croke’s theme is similar to Brock’s.

Forty years ago Wyndham acknowledged that there were hardly any good books on Australian educational history. Not much has changed in the intervening decades. Worse still, there is now less chance of the situation ever improving. But why should the history of education matter at all to us? One good reason is that our current institutional amnesia is leaving us vulnerable in terms of educational policy analysis and development. For example, if we knew our history better we would not be so preoccupied with multiplying expensive but self-contained literacy programs, each burdened with the political expectations of instant advancement or permanent cure, like a series of childhood inoculations.

He points out that losing our memory is often our foremost fear, and goes on to argue that:

…societies and institutions also need their own memory for similar purposes but their memory can only be provided by historians and those imbued with a sense of history, as well as by recognising and preserving what is often labelled ‘corporate memory’.

Finally, Croke suggests the Australian College of Educators take up reinvigorating the study of the history of education as a special agenda for future years.

I, for one, would be prepared to put some energy into such an agenda. Even finding, documenting and publishing the deliberations, debates and decisions of national meetings of Ministers of Education, in the various forms they have occurred over the last 50 years would be enlightening for those engaged in similar meetings today.

The issues are not new. Our engagement with those issues however, is the engagement of dementia sufferers and will look thus to any future generation that can find, or stumbles across, the source documents.

I like Brian Croke’s suggestion. The profession can’t control the churn of Education Ministers, or even the continuity of the public service, but we could value and improve the study of the history of education.

One Response to Avoiding Institutional Dementia: reinvigorating the study of the History of Education