With all its shortcomings, the My School website, together with data from successive PISA results, is providing evidence that you need  more than luck to get a fair educational go in the Lucky Country.

In an article in Inside Story 11 July 2011, entitled How fair is Australia’s welfare state? Peter Whiteford concludes the OECD data shows that Australia actually has the lowest level of middle-class welfare of any OECD country, a position it has held consistently for at least the past thirty years. Australia distributes more to the poorest 20% of the population than any other OECD country except Denmark.

This policy outcome is in line with the way Australians see their country and their culture. Why is it then, that education policy in Australia has not produced similar outcomes and will the Federal Government’s Review of Funding for Schooling, chaired by David Gonski be able to affect a change?

On his return to Australia from several years at the OECD, Barry McGaw spent much time arguing the dangers of the “equity gap” in Australia’s otherwise excellent PISA results. 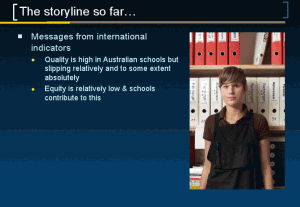 McGaw’s data shows clearly that Australia’s results are polarised, even though they average out respectably. Students from socio-economically disadvantaged communities performed significantly below those in more advantaged postcodes. The gap, he argued, was not inevitable; comparison with other OECD countries indicated it did not need to be so.

In a paper, Equity and Australia’s schools: what the My School website tells us, given at the recent Australian College of Educators conference in Sydney, Bernie Shepherd analysed My School data to show a similar effect. In a snapshot of the interaction of performance and background, his Equity and NAPLAN graph  says that destiny is so strongly determined  by demography in our schools, that we can say with some certainty that any change of 100 ICSEA [Index of Socio-educational advantage] points will produce a change of 30-40 NAPLAN points before  any special school factors kick in. This is not equity: if our young people had no barriers to achieving similar educational outcomes, irrespective of their families’ location, background, wealth, etc – the graph would be flat .

The NSW Department of Education’s submission to the Review of School Funding presented evidence that the most disadvantaged students could achieve  results better than students with more advantaged individual circumstances when placed in schools with more advantaged populations  arguing that any new funding model needs to take account of the obverse of that – removing advantaged students to private or selective schools increases the disadvantage of those left behind. While this argument has some echo of one of the arguments against single-sex girls’ schools – that boys do better in co-educational settings – we need to revisit the policy goals of public education and re-examine the kind of society we want to be.

If we want a society in which every citizen can contribute to the maximum, in which position and wealth are not destiny and every child has a chance to not just develop, but contribute to capacity, we need to be prepared to make and support some hard policy decisions.

Chris Bonner has written a couple of helpful articles for Inside Story.  On 11 May 2011 in My School PISA and Australia’s Equity Gap  he looked at schools in Wagga Wagga through the lens of My School database. The data he extracted challenge the view that public  and private schooling systems in Australia serve all communities.

To argue,  Bonner says, that “some non-government schools serve some less affluent communities”  is misleading. My School shows they manage to enrol the more advantaged families in the communities they serve.

PISA’s results,  he says, show that regardless of their own socio-economic background, students attending schools with a socio-economically advantaged intake tend to perform better than those attending school with more disadvantaged peers. In the majority of OECD countries, the effect of the school’s economic social and cultural status on student’s performance far outweighs the effects of the individual student’s  socioeconomic background.

I wrote in a previous blog about my parents’ refusal to buy a uniform for me to wear to primary school. Their planning was set on my attending a selective high school with a different coloured uniform, and the budget didn’t run to a primary school uniform. Had I not gained entry to the selective high school, they would have worked overtime, scraped and saved to send me to a private girls’ school. My father was a process worker and my mother a part-time canteen worker. Social advantage was abhorrent to them. They believed in ability, hard work and education. They opposed state funding for private schools and would have continued to do so had they sent me to one.

It is more than 50 years since my parents and I faced this dilemma, without NAPLAN and the My School website. The dilemma for parents, however, hasn’t lessened in half a century. Choice of itself doesn’t produce quality and without intervention to off-set disadvantage, it certainly doesn’t produce equity or a pathway for all.

The policy problems are now more acute. The affluence of the last  50 years hasn’t solved all our  problems, nor have it’s benefits been evenly distributed. While we like to think of ourselves as egalitarian and classless, the political compromises in education over the last 50 years have not produced a situation in which every Australian child has an equal chance of success but one where Australian school performance is largely determined by postcode and the social and intellectual capital of its cohort – regardless of whether the school is public or private. This is not true for all OECD countries, many of whom perform as well or better than Australia without any equity gap based on socio-economic status.

As Bonner points out, Schools that charge fees inevitably snare a middle-class enrolment and they harvest everything else that goes with those students.

If we can achieve a welfare state that is fair by world standards we should be able to achieve an education system that is similarly fair. At the moment we are not within cooee.

It is therefore heartening to see public intellectuals using My School data to wrestle with the problem. Whatever its shortcomings, My School gives us some data to examine, a stake in the ground against which we can measure policy, rather than depending on dogma and assumption. Perhaps we can further draw on it to measure the extent to which we meet the spirit of our founding principles of free, compulsory and secular.

A crux, as Bonner points out, is the way all resources, including the students themselves, are distributed.   But that is a subject for another post!