Guest blog: Rising costs of a failure to communicate and educate

We invited our compadre and colleague Lindsay Fitzclarence to contribute on education and the environment.

The Road is a novel written by the American writer Cormac McCarthy. It is a story of a man and his son traveling through an environmentally and socially devastated landscape. Although the author never offers his readers any precise details he provides ample evidence that a terrible and widespread catastrophe has occurred.

For survivors every moment and every step is dangerous and difficult. It is a world in which most of the hallmarks of civilization and law and order have disappeared. The storyline echoes the words of philosopher Thomas Hobbes who described a world involving ‘the war of all against all’.

Cormac McCarthy’s novel has achieved wide acclaim. The Road was awarded the 2006 Pulitzer Prize and was a national bestseller in the USA. Since publication it has been produced as a movie. There is ample evidence here that it is a narrative relevant for these times.

The Twentieth Century has been labeled the most bloody and brutal in all human history. Millions were killed in wars, untold numbers injured as a result of conflict and entire populations displaced and left homeless. After one decade of the Twenty First Century there are signs that humans are entering a new arena of conflict but this time it is against powerful climatic forces. It is this trend that has been so graphically dramatized in The Road. 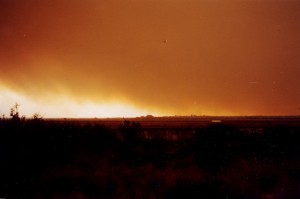 As was the case in the conflicts of the last century this new wave of natural disasters has caused a great deal of death, destruction and dislocation. Collectively these events are all examples of ‘extreme weather’ and indicators of significant climate change (see Fall of Roman Empire linked to wild shifts in climate,

What is to be done?

During the 1970s and early 1980s the concept of ‘sustainability’ emerged as a global environmental theme. Subsequently a number of important international communiqué and multi-government organizations developed. One of the most important of these was the Intergovernmental Panel on Climate Change (IPCC) which has studied and reported on issues associated with global climate.

This body, now comprised of thousands of scientists, data analysts and a relatively small secretariat, has gathered, synthesized and summarized large amounts of evidence. The result has been the publication of four major reports, the last one presented in 2007. The early findings of the IPCC fostered a new form of international dialogue and policy making. The first tangible step in the process occurred with the Rio Earth Summit in 1992 which brought together over 170 nations and set in train a process that was formalized in the Climate Change Convention and then the Kyoto Protocol in 1997.

One of the issues that emerged from the 1992 Rio Summit was a, global, concern about a scarcity of water in a large number of locations. Policy makers and politicians in Australia responded actively to this call for change through policy development and closer government management. During this period, of the early to mid 1990s, a number of major policy changes took place and that have set the scene for subsequent and current water policy developments.

Between 2004- 2006 a National Water Initiative was formalized. The overall objective of this intergovernmental agreement is to;

…achieve a nationally compatible market, regulatory and planning based system of managing surface and groundwater resources for rural and urban use that optimises economic, social and environmental outcomes.

A number of more specific aims follow. These include; 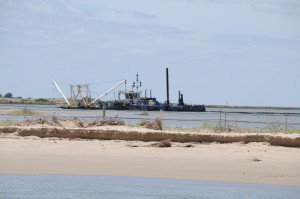 In October, 2010, the recently created Murray Darling Basin Authority, representing the Australian Government, released the Guide to the proposed Basin Plan (http://thebasinplan.mdba.gov.au/guide/guide.php?document=the-murray-darling-basin). This wide ranging document provided a comprehensive assessment of the health of the rivers in the system and, based on that analysis offered a number of key assertions supporting the approach taken in the Plan. They are as follows;

The plan had called for between 3,000 and 4,000 gigalitres of water to be returned to the river system to ensure the sustainability of the basin, with substantial cuts being made to irrigation allowances.

Release of the policy document produced a widespread negative response. Communities throughout the region quickly banded together to register anger and dissatisfaction with the plan’s analysis and proposals. The following review provides an appropriate summary of the general reactions of the draft document.

October’s release of the draft Murray-Darling Basin Plan by the MDB Authority sparked the kind of response in communities along the Murray not seen since the days of the gun reform law debate. Angry crowds harangued authority representatives at community consultation meetings, and copies of the plan were burned in the street. The plan was meant to define the debate over water and the future of irrigation along the Murray River. By December, just two months after the release, the authority chairman Mike Taylor announced his resignation.

Current debates about directions for future developments in the Murray Darling river systems fall into two major groups of thought. On one hand there has been vociferous demands for the maintenance of existing land practices, balanced within consideration of the claims of a large number of current land users. This confederation, of diverse interest groups, has sometimes occurred under the general banner of economic ‘sustainability’(http://www.mirrigation.com.au/index.htm) . Counter-posed to such groupings there is a diverse range of environmentally focused interests who have advocated a wide range of reforms. The Wentworth Group of Concerned Scientists belong to this second grouping. Suggestions from this quarter include calls for radical reductions to allocations to the irrigation industries (http://www.wentworthgroup.org/blueprints/sustainable-diversions-in-the-murray-darling-basin). Inevitably it will be left to government policy makers to strike a  compromise and no doubt this will follow a pathway that is constrained by the limits of this divided logic. That stated there is clearly a warrant for alternative ways of understanding and practicing water use. 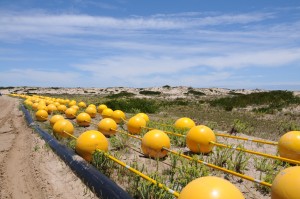 pipeline pumping seawater into the lower lakes of the Murray

For the vast majority of individuals daily life is experienced in the ‘here and now’. In one’s restricted field of movement, created by limitations of time and resources, most energies are devoted to immediate, concrete and personal concerns. As a consequence many people are deprived of the intellectual resources needed to make sense of large scale, ‘meta’, issues. Subsequently many people become vulnerable to dominant message systems such as those provided by the print and visual media. In order to critically engage with issues of an abstract and distant nature new discourses are required. For individuals to be actively and fully engaged in shaping a political agenda an extended and informed perspective is needed. Here then is a warrant for a new form of public education. A caveat is required.  Because these issues are complex and saturated with many different assumptions I am forced into a cryptic and assertion based overview. 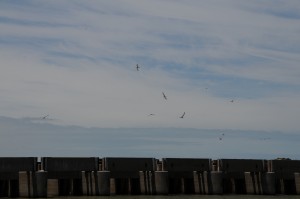 Goolwa barrages open for the first time in years

The unfolding ‘story’ of the Murray-Darling Basin provides a warrant for new ways of thinking and a different form of politics. The first requirement is that in times and situations involving uncertainty there is a need to suspend the need for fixed solutions. Instead this suggests a way of thinking that embraces change and non-linear thought. In more concrete terms this means that thinking and action should be whole of system and trans-disciplinary. Based on what has happened in the Murray-Darling, understanding and action should be derived from rudimentary considerations of economics, ecology, sociology and political science. In times of increasing specialization, such synthetic ways of ‘knowing’ are not the norm.

The second major requirement is the need for effective modes of communication. Within the unfolding story of changes in the Murray-Darling Basin there are numerous examples of major communication breakdowns. This trend is being replicated all over the globe. New forms of the art and science of communication are needed and drawn into reformed public education. A logical starting place is the establishment of the practice of the 3 L’s; looking, listening and learning.

In conclusion, what I am arguing for is the development of a fusion of historical, cultural and interpersonal sensibilities about processes of change as events fold into each other causing mutations and unpredictable consequences.