Lessons from the past: #1

When it comes to education, there is no such thing as ‘the good old days’. Good things did, of course happen – mostly to those of us who succeeded. It is easy to feel nostalgic about a happy and rewarding time at school.

I went to Sydney’s Bellevue Hill Primary School in the 1950s. Bellevue Hill was not quite the posh suburb it is now, though it was always middle class. Classes were 1950’s sized, about 40 kids, and boys were separated from girls from the end of Junior Primary. 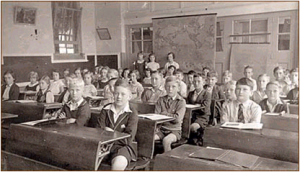 the girls were 'just visiting'...

It was possibly about the curriculum, I know the girls did sewing, but I cannot think of a male equivalent that we did. It wasn’t about nascent s*x: we were allowed to play together in the breaks and we did folk dancing and school performances together. Perhaps it was about discipline. The girls had female teachers. The boys had male teachers and got the cane. Although I loved school and was a conscientious and bright student, I was caned. Mr Watters, who had a withered arm and was well beyond retirement age (there was a post war teacher shortage), sent me next door to be caned by Mr Spence for spelling errors.

Spelling was not my strong point. We copied corrected spelling words from our compositions onto bits of paper and kept them in our spelling tins – cigarette tins with delicious nicotine smells. On the teacher’s instruction we would take out our spelling tins,  take a word out of our neighbour’s tin (our ‘neighbour’ being the boy with whom we shared a desk) and ask him to spell it .We put a tick on it if he got it correct. The word was thrown away when you got three ticks. Three crosses and you got the cane.

My neighbour was Ronnie Lawson. He had very few words in his tin: the vocabulary he used in his stories was not as exploratory as mine. He was a refugee child and his family’s first language was not English. When his family arrived in Australia, they asked to change their name to Australia’s greatest writer. “That’ll be Henry Lawson” said the immigration official. About one third of the students in my class were refugee children. Their experience did not receive any acknowledgement, and they did not receive any ESL support.  They were ‘refos’ and managed as best they could. 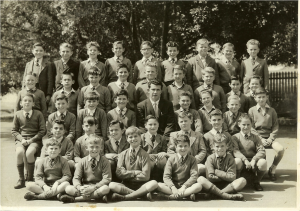 Ronnie Lawson sits directly below the teacher, with the cowlick...

In my final year of Primary School I was given some responsibilities. One of them was to purchase the headmaster’s cigarettes. It meant leaving class during lessons and crossing the busy four-way intersection to get to the shops. The headmaster was a recluse. He didn’t teach or appear out of his office. My father said he was an alcoholic as a result of the war. So I felt privileged entering his sanctum with his tin of Ardaths. Jillian did the same task for her headmaster at her school. Unlike me she never took up smoking.

During the final year at Primary School the dreaded IQ tester would visit and IQ test us. Those above a certain score were allowed to go to High School, and the Leaving Certificate; those below, went to Technical School and left school at the Intermediate Certificate. I passed and went on to High School. My brother was designated for Technical School. This was not my parents’ aspiration for him and they entered him, and ‘to be fair’, me, into private education which they could never really afford. I can visualise the IQ tester to this day, he was short and swarthy, and smelled of tobacco.

Such were the good old days.

4 Responses to Lessons from the past: #1