Lest we Forget- or Fail to Learn

Posted by Jillian in Curriculum, History of Education 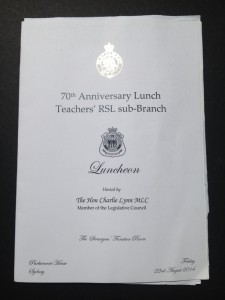 On 22 August I attended the 70th Anniversary Lunch of the Teachers’ RSL sub-Branch in The Stranger’s Function Room of the NSW Parliament. I was in Sydney by chance, staying with a friend who was attending the lunch and who invited me to attend as a guest.

It was a remarkable experience.

As far as I can determine from a search of State RSL websites, Teachers is the only non-geographical RSL sub-Branch. It appears to be a synergy of values and culture, reinforced by a number of physical objects, by predictable, routine ceremony and by story-teller teachers, some of whom have also been writers.

I doubt many, if any, of those present at the lunch, least of all the veterans and current serving men and women, have a simple view of war, or of our country’s involvement in various wars. What they do have, is an understanding of the value of individual human lives, a commitment to public good – to public service in its best and deepest sense, along with a commitment to generational learning.

Over the last two decades, the sub-Branch has argued the case for the preservation of records and memorials that recognise teachers who served in World War I, World War II, Vietnam, Korea and subsequent conflicts.  It has been remarkably successful. A set of Honour Boards – the first put in place in the Bridge Street head office of the NSW Education Department at the end of World War I and later removed to storage – were located, supplemented with Honour Boards commemorating teachers who served in World War II plus Boards commemorating teachers who served in subsequent conflicts, including Korea and Vietnam.  The last are thought to be the first in the country to recognise Vietnam veterans.

The story of the recovery, restoration and supplementation of these Boards was told in a book, Soldier-teacher War Memorials, produced in 2000, with text by Mr Tom Spencer and support from the NSW Teachers’ Federation, the NSW Education Department and the Teachers’ sub-Branch. That book is digitised and available online. It testifies to the values, integrity and skills of the education community. It tells a story – of determination, cooperation and perseverance. It acknowledges the centrality of individuals, and tells many of their stories. It recognises the need of communities to commemorate their history and maintain continuity. 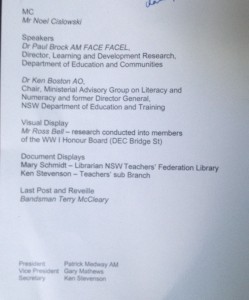 The lunch celebrated the publication of a remarkable three volume manuscript  New South Wales Department of Education Record of Service in Two World Wars , written by T A White, a NSW public school educator who served with in the AIF in World War I. Dr Paul Brock spent a year preparing the manuscript for publication. It has been made available through the NSW DEC website in pdf format.

At the lunch, both Dr Ken Boston and Dr Paul Brock were made honorary life members of the Teachers RSL sub-Branch. Both spoke eloquently. Both kindly gave permission for the text of their speeches to be published and quoted here.

Dr Boston paid tribute to Tom White’s book and those whose service it records.

It is a remarkable document, and Paul Brock’s work to make it a reality is also remarkable.

In telling us something of the war record and teaching record of each of the teachers on the honour boards, it makes each person unique and real, rather than simply a name in alphabetical order on a memorial.

Further, it reminds us of the extraordinary commitment of the whole public school system to the 1914-19 war effort

He went on to add:

Sometimes, in quiet moments in the Bridge Street building I used to reflect on the meaning and magnitude of the thousands of names on these boards…

…every one was more than a name: each was an individual with a personal history, which we now know through Tom White and Paul Brock; but also with a family, a place called home, and a set of beliefs and values and aspirations that lie behind the name neatly printed in gold on oak or mahogany.

Everyone of them, distilled down on these boards to surnames in alphabetical order, was flesh and blood.

They were men who had taken up the profession of teaching, whose commitment was to creating the future of this country through the education of its young, but who found themselves in circumstances where they believed it was necessary to take up the profession of arms, to protect the very future itself.

I have often looked at the Memorial for the Great War, and pondered on why these teachers actually went to war…

…Further, I used often to wonder, how teachers dealt with the extraordinary transition from being Socrates to Caesar and back again (if they survived) within a space of a few years.

What did they think? What did they feel? How could they settle back once they returned? How did one return from the horrors of Passchendaele to Rose Bay Primary School, or from Kokoda to Collarenibri?

Having been trained in warfare, having killed, and having spent long periods of campaigning at grave risk of being killed, or as a prisoner of war, how did a member of the noblest of professions return to teaching a class-room of eight year olds?

As many of us, who were taught by veterans of those wars (my teacher in Grades 5 & 6 was a WWII veteran trained on a post-war scholarship) know and understand, they did so with pain and difficulty, mixed with gratitude for survival and determination to contribute. 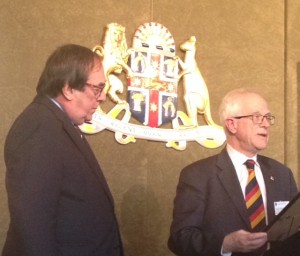 What strikes me as remarkable – and uplifting – is the personal and institutional commitment to history evident at the lunch. Members of the organisation, and those who have mentored and nurtured it, are acutely aware that our future depends on understanding and learning from our history.

What they understand uniquely, is that the Honour Boards, the stories, values and commitment they commemorate and symbolise, are a part of our education history as well as our war history, upholding both cultural and social values with which thinking people struggled – and for which many of them laid their lives on the line. They also uphold educational values – of a profession that understands how learning works and that has doggedly fought to preserve the artefacts, symbols, events, records and stories that ensure each generation can understand the human struggle and the values on which our future depends.

In the words of Dr Boston:

The purpose of a memorial is not to legitimate a war, but to honour those who believed that it was fought in the service of a principle so fundamental that they were prepared to give their life for that cause.

The full text of Dr Boston’s address is available here. 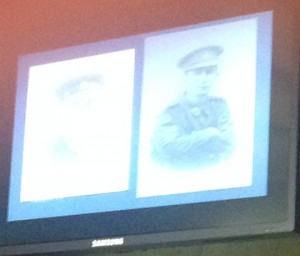 Dr Brock’s illustrated address (full text) told some of Tom White’s story – his early life in Bendigo and Deniliquin, Teachers’ College in Sydney, appointments in Sydney, Newcastle and Hillston, before enlisting and serving in WWI, then, in 1920, appointment to Gresford Public School as Principal . He was also Principal at Bellevue Hill. He joined the Inspectorate in 1929 serving in both country and city, retiring in 1950.

By the time he commenced his herculean task in 1951 of writing New South Wales Department of Education Record of Service in Two World Wars – which he completed in
1958 – Tom White was already a published author. 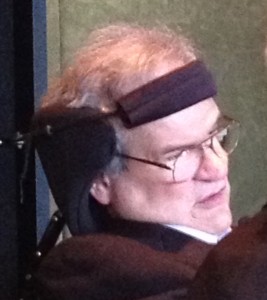 Finally, on a personal level, I am so delighted that 56 years after Tom White completed his monumental work, 52 years after his death, 18 years after the handful of three part sets were published, and just over 1 year since I set out on my quest to honour Tom and his legacy in the best way I believed we could – enthusiastically supported by our Departmental Secretary, Dr Michele Bruniges AM – we have finally been able to fulfil Tom White’s passionate desire to have his work made accessible to all public school educators and their students for generations to come. But, thanks to the power and accessibility of the internet, in 2014 we have been able to expand, indeed surpass, the scope of Tom’s vision all those decades ago.

I think that that is something to make all of us here today both happy and proud.

I admit to feeling happy and proud -also enlightened and inspired in the company of some remarkable people. In addition, I was moved by the support given to these projects by the NSW Education Department at a time when many things are more popular than educational history. It is encouraging to see such integrity. I hope teachers in all states use the resource, especially in these anniversary years. 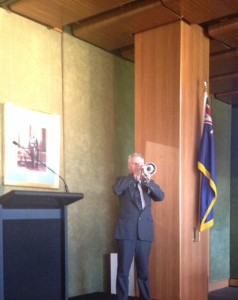 The Bridge Street Education Department building is mooted for sale. To many, including members of the Teachers sub-branch of the RSL, it is a shrine, with elements of the sacred. As a young teacher in NSW, I was wary of shrines – wary too, of the Bridge Street offices of the Education Department! My experience as a Sydney Anglican reinforced a distrust of symbolic objects. Forty-five years as an educator and public servant taught me a lot about the role of sacred, symbolic objects and places, their power and role in learning and social cohesion.