Posted by Jillian in Curriculum, History of Education, Secondary schooling

An article in the Sydney Morning Herald on 14 October marked the 90th anniversary of McIver’s Baths at Coogee Beach. The McIver Baths is the last women and children only coastal pool left in Sydney.

It would be interesting to look at the contribution these baths made over the years to the education of girls –our confidence in the water and in our own bodies.

In my first two years of high school – way back in 1959 and 1960, we were taken by bus, every Wednesday afternoon in summer and spring, to those baths, called in those days, in my memory, the Joan McIver Baths for Women. Even then the name was quaint to the ears of 12 year olds.

We would arrive in uniform, with our briefcases and sports bags – plastic zip-up bags in the school colours with a school logo – crowding out the change room with its wooden benches, and change as fast as we could into our swimming costumes. As we were changing, the last of the general public swimmers would vacate the pool and try to share the change room. I remember looking askance at their aged, spreading bodies, unable to imagine myself their age and still being alive.

Thankfully we can reach an age and body shape we cannot imagine at 12! 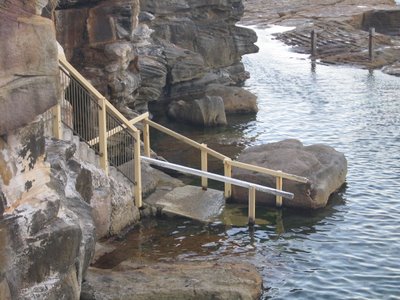 Changed, we scrambled to the pool – jumping well out to avoid the sides, jagged with rocks and shells. The water was salty and clean, and, if the tide was on the high side, continually refreshed from spray and wash. In the king tides, early in the year, the waves created a swell that moved us from the sea side of the pool to the wall on the other side.

We had no formal lessons there. We spent our 2 hours moving around in the water, avoiding the rough sides, diving goggle-less under the water to look at the sea-creatures on the sides and bottom of the pool, practising strokes, calling and laughing, treading water, enjoying the freedom and the sheer joy of being in such a location, the scarcity of sitting room a further incentive to stay in the water. 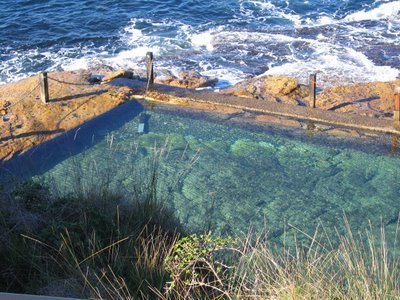 I have no photos of those Wednesday afternoons, but could the images imprinted in my mind be transferred to a printer, they would be indistinguishable from those in the Sydney Morning Herald article or Sally’s swim blog.

In my third year of high school, Wednesdays changed.

Our PE mistress had retired and the new one, quite rightly, developed a sports program that gave us more choice and introduced a swimming program that progressed through lifesaving awards. Swimming moved to an indoor pool with tiled sides and fewer risks. I’m glad of what I learned in the lifesaving classes.

However, I have never forgotten the joy of those times at the McIver Baths, have never lost the love of the rocky coast, and the sound, smell and swell of the tide as, part of a group of girls, I immersed myself in it from the shelter of a barely-protected pool.

And throughout the cycle of my life, and my career in education, including my time as principal of a girls’ school, I have never lost the image of those 50-70 year-old women, coming out of the pool to get changed, smiling and talking, their aging bodies dripping from the sea .