Posted by Jim in Curriculum, Uncategorized

The South Australian journalist, author and poet, Max Fatchen, died on the weekend. He was 92. He seemed indestructible – he wrote his final newspaper column only last weekend. Educators are in his debt and collectively we can feel the sadness of his death whilst paying tribute to the pleasure he gave us and our students, through his writing and through his extraordinary personal engagement with our students.

He wrote many novels and books of poetry that were bookroom staples of schools in the 70’s, 80’s and 90s and there are many current children who read his works with pleasure. His poems feature prominently in current teaching anthologies including the Big Book of Verse for Aussie Kids by Jim Haynes (Allen and Unwin 2009). His novels are often considered and compared with those of Colin Thiele, a contemporary SA novelist. Fatchen’s were perhaps less episodic in structure and more insightful of character – perhaps the journalist’s eye rather than Thiele’s teacher’s framework. Fatchen, on the right in the photo below with Thiele, understood childhood and empathised with children. 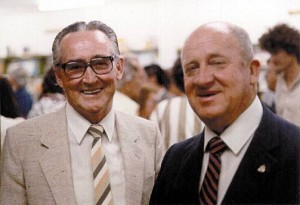 I met Max Fatchen when I was principal of Smithfield Plains High School. I asked him if we could name our newly constructed library after him – he grew up in the area and was a local resident. He came to check me and the school out and gave us his blessing and a number of artifacts. He told me many hilarious stories. He was injured in the Pacific war by falling crates of Coca-Cola… His self-deprecation was inherent, not some writing artifice and his humour was based in a respect for people and their foibles. He connected with kids by observing, understanding and enjoying their lives. They wrote to him in their hundreds – and got replies.

We are unlikely to see his kind in Australia again. His life was dedicated to writing and communicating, tapping away on Ivan the Imperial, his favourite typewriter. Here are extracts from some of his poems…

‘Now go to bed this instant!’

But have they ever dared

The shadows in the passageway?

I’m the hero of comet and planet,

My lasers can win any war:

How come I lose all the battles

With the teacher I have in Year Four?

She whacks the ball… 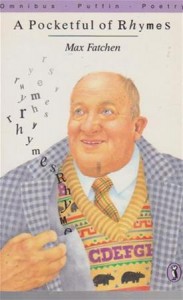